What is Vapor Intrusion?

Vapor intrusion occurs when vapor-forming chemicals migrate from a subsurface source into an overlying building — similar to radon gas seeping into homes.
Vapor intrusion occurs when there is a migration of vapor-forming chemicals from any subsurface source into an overlying building. Recognition of soil vapor intrusion to buildings and other enclosed spaces occurred in the 1980s with concerns over radon intrusion. Subsequently, there was an increasing awareness that anthropogenic chemicals (e.g., petroleum hydrocarbons and chlorinated solvents) in soil, groundwater, and sewers and drain lines could also pose threats to indoor air quality via the vapor intrusion pathway.

In extreme cases, the vapors may accumulate in dwellings or occupied buildings to levels that may pose:

In buildings with lower concentrations of vapor-forming chemicals arising from vapor intrusion, the main concern is whether the chemicals may pose an unacceptable risk of health effects due to long-term (i.e., chronic) exposure to these lower levels.

A complicating factor in evaluating the potential chronic risk from vapor intrusion is the potential presence of some of the same chemicals from emission sources in the building such as household solvents, gasoline, and cleaners that may pose, separately or in combination with vapor intrusion, a significant human health risk.

If you have concerns about vapor intrusion or indoor air quality where you live or work, please contact your state health department. 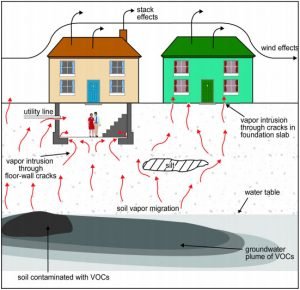 VOC is an acronym for Volatile Organic Compound. VOCs are common chemical contaminants released into the air in both residential and commercial buildings. These chemicals typically leave odors. They are about 10 times more concentrated indoors than outdoors and include toxic compounds such as formaldehyde, toluene, benzene, xylene and perchloroethylene.

While it is easy to understand how businesses like auto paint shops and factories would have an issue with VOCs, even office buildings can have poor air quality due to VOCs. The effects of breathing them day in and day out ranges from mild irritation of the eyes and throat to headaches, nausea, nervous system damage and cancer. There are many furnishings and products used in offices which release VOCs, including:

Just like radon can accumulate in a home, so can VOCs—particularly in buildings with poor ventilation. In a house, it’s easy enough to open windows on a nice day to clear the air. Most office buildings, though, have windows that cannot be opened. If the HVAC system is inadequate for the size of the building, or is not working properly, VOCs can accumulate to dangerous levels.

What Does The EPA Have to Say About VOC Levels?

According to the EPA, as many as 50 to 300 different VOCs are present in the air of homes, schools and offices. These compounds are measured in parts per million (PPM). The concentration of these compounds and their effects are outlined below:

Although office buildings produce far fewer VOCs than industrial operations, even nice-looking offices can harbor unhealthy VOC levels. New office buildings tend to have the highest VOC levels due to all the new materials releasing chemicals into the air. This generally lasts about 6 months and is referred to as “chemical outgassing.” Employees who are particularly sensitive to these toxic compounds may complain of headaches and irritation of the eyes, nose, or throat. Such complaints are typical of “sick building syndrome,, which is also known as “tight building syndrome” in reference to a building’s lack of fresh airflow.

Obviously, reducing VOC levels benefits everyone. Aside from helping to reduce ozone in the atmosphere, it instantly creates a healthier work environment for your employees. Fewer of them feel bad when on the job, there are fewer sick days, and morale is generally improved just by knowing they are working in a place that cares enough to provide a healthy work environment.

Can VOCS Enter a Building Through the Soil?

Yes, they can, and most definitely do.

VOCs entering a building through the soil is known as vapor intrusion. The concern is very real, since one of these VOCs is the explosive gas methane. The typical point of entry for these gases is the basement floor, or crawl spaces. Vapors can also enter through the slab floor of a building built on grade. Obviously, this applies to both businesses and homes.

VOC mitigation typically involves installing a sub-slab depressurization system. This creates a vacuum beneath the slab, drawing VOCs into the exhaust system. In larger buildings, there may be a network of PVC pipes attached to suction blowers. The VOCs are exhausted into the air outside the building, usually at the roofline or other elevated part of the structure away from any windows.

Schedule a VOC Test For Your Business

The U.S. Green Building Council (USGBC) contends that VOC levels greater than 500 ng/L can be a health hazard in homes. Shockingly, data collected from thousands of homes tested for VOCs show the average indoor VOC level is 1,200 ng/L—more than twice the recommended threshold level. It is not a stretch to assume most businesses have similarly high VOC levels, especially considering most businesses have fixed windows that cannot be opened up to readily clear out stale air and let fresh air in.

Take the first step towards a healthier, more productive workplace by scheduling a VOC test. Safe Shelter Environmental uses the most advanced testing equipment available to ensure accurate readings of VOC levels. If there’s a problem, we’ll advise you on the most proven and cost-effective approaches to improving your air quality.

Get Your Free Mitigation Estimate Today!